The NGB-R is a multimodal and high-end, 4D bioprinting system -  developed specifically for tissue engineers, researchers and biologists.

By combining laser-assisted, micro-valve and extrusion bioprinting, it enables true versatility of bioprinting (from cell to spheroids) and offers the possibility of using a large number of biomaterials and hydrogels.

The NGB-R includes an embedded microscope for in-line cell printing monitoring and relies on a complete software suite for managing bioprinting protocols, from biological CAD to data analysis of manufacturing.

The NGB platform is based on four single-cell resolution technologies:

The NGB-R enables true versatility of bioprinting (from cells to spheroids) and offers the possibility of using a large number of biomaterials and hydrogels to achieve unparalleled technical capabilities including:

Based on 10+ years’  experience and innovation research, Poietis developed the NGB-R™, a 4th generation multi-modal biofabrication instrument based on unique laser-assisted bioprinting technology.

The instrument gives tissue engineers and researchers superior resolution and precision, as well as viability, repeatability and reproducibility.

The NGB-R™ instrument is an all-in-one, standalone bioprinting platform, fully-integrated into a tailored, stainlesssteel made biosafety cabinet (BSC).

It features high-end robotics and automation tools for unrivaled precision and reproducibility, including a 6-axis robotic arm ensuring printing job sequences are carried out effectively and accurately.

Combined to the system is a powerful on-board computer and large 21” HD touch-screen interface providing an effortless system operation.

All resolution and precision levels available

The NGB-R™ is the first commercially-available instrument to boast laser-assisted bioprinting, allowing to deposit micro droplets (with size from 300 to 50µm) of cell bioink with a precision of a few microns only.

With outstanding printing capabilities, all levels of resolution are possible, from aggregates to cellular spots and single cells: 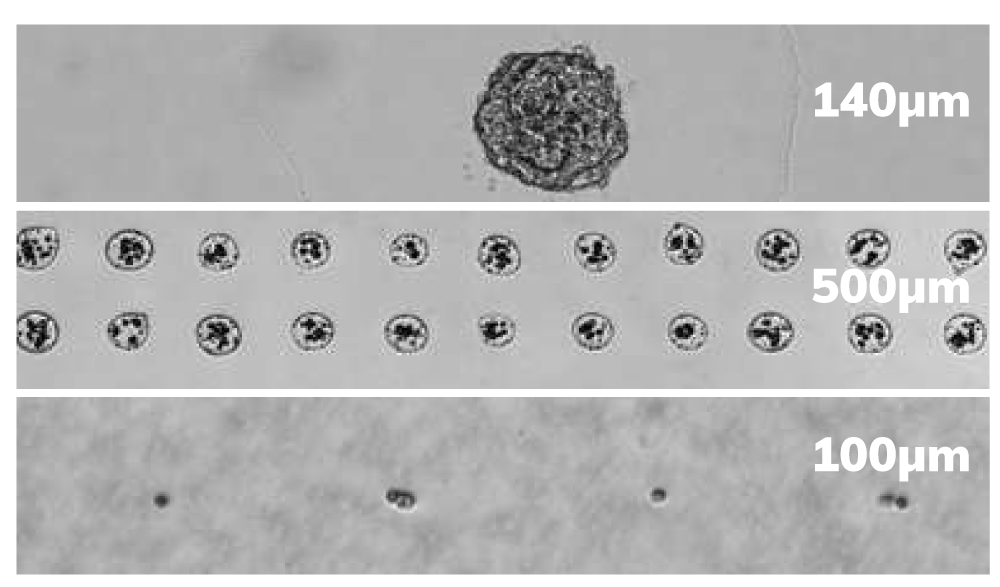 As a nozzle-free printing technique, laser-assisted bioprinting helps overcome this critical issue. Cells are transferred with laser pulse energy, hence do not endure any force whatsoever. So in addition to a high speed of printing, LAB provides much greater cell survival rate and leads to truly functional tissues.

Precise and proper cell patterns are key so that cell proliferation and migration occur and specific tissue functions emerge. This can only be achieved with superior resolution and precision.

Up to 3 nozzle-based printing heads

These may be used for simultaneous dispensing of cells and biomaterial or an hydrogel without any living cell. Micro-valve (MV) is often used for stable liquid-type biomaterials while bio-extrusion (BE) can work with viscous, gel-type ones.

Transfer your printing work to NGB-R™

You may already be using nozzle-based bioprinting. That is why NGB-R™ allows you to keep working with the techniques you are familiar with, yet add LAB to your current extrusion work and take your tissue engineering further. 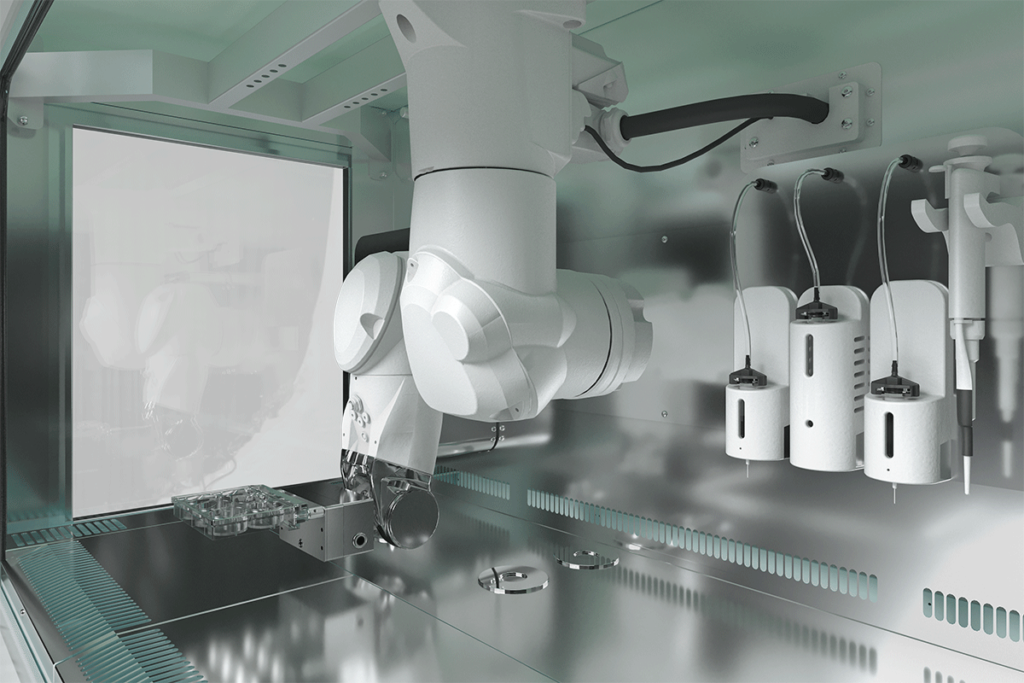 How Does Laser Assisted Bioprinting Work?

Poetis’ laser assisted bioprinting (LAB) technology overcomes many of the technical limitations of extrusion based bioprinting methods and makes it possible to print living cells and biomaterials with a cell-level resolution. It is therefore the bioprinting technology that offers the highest resolution. Further, LAB allows cells to be positioned in three dimensions with micrometric precision allowing users total control over cell density, distribution and patterns within the printed tissues.

Laser-assisted bioprinting usually consists of three parts: a pulsed laser source, a cartridge   (composed of an ink film spread on a glass plate), and a receiving substrate. The focusing of a laser pulse on a cartridge results in the formation of an ink jet towards a receiving substrate on which cell microdroplets are collected. By controlling the physical conditions of the ejection (energy, viscosity, etc), the volume of the droplets is controlled precisely (~ picoliter). The cell patterns are obtained by rapid scanning of the cartridge by the laser, which results in the formation of 10,000 droplets per second.

There are many advantages to printing living cells with LAB starting with viability. LAB is a nozzle-based technology which eliminates shear stress from the bioprinting process resulting in a cell viability ratio greater than 95%. Further, LAB allows for increased cell patterning possibilities and advanced tissue modeling due to the unprecedented capacity to spatially organize cells in 3D. The NGB-R not only offers LAB technology but combines it with conventional micro-valve, and extrusion bioprinting capabilities, resulting in the most advanced all-in-one bioprinting instrument for research applications.